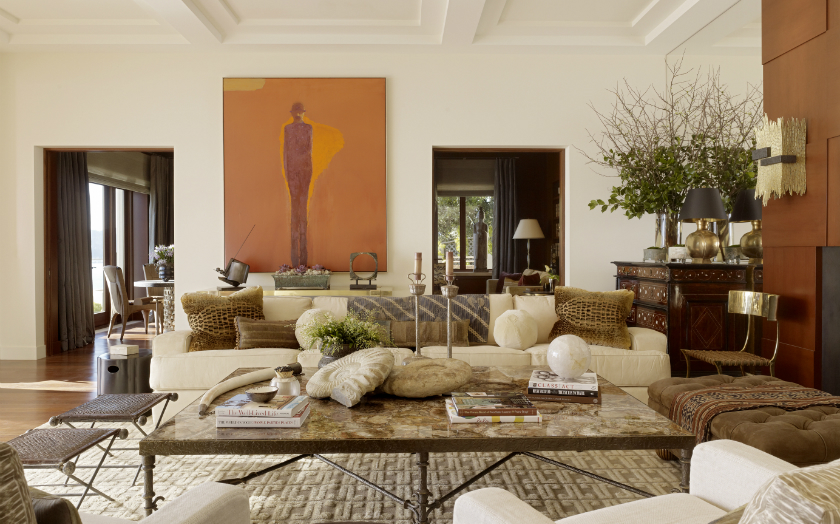 Suzanne Tucker, a permanent fixture on AD 100 Top Interior Designers, is  known for opulent Napa Valley estates, glamorous penthouses on San Francisco Bay and stylish bespoke flats that flutter the dovecotes.  A self-professed “schizophrenic mix of Tinkerbell and Glinda the Good Witch,” the California-based designer is famous for her sumptuous textiles and classical designs embodying her gravitas and charm. As the protege of legendary designer Michael Taylor,  she got her fair crack of the whip in the mid eighties and, after his sudden death in 1986, she formed Tucker&Marks with her business colleague-turned-husband Timothy Marks.

Tell me something about you that most people don’t know?
In the late seventies I managed the Yves Saint Laurent and Rive Gauche boutique at I. Magnin in Beverly Hills, such a glamorous and decadent time to be in fashion.

If a genie were to grant you one wish, what would it be?
The ability to stop the clock; there are not enough hours in the day.

What was your last thought before going to bed last night?
It’s good to be home and in my own bed.

A good day is…?
Working with my wonderful team, crossing off tasks on the never ending to-do list and spending the time with the people and pets I love.

A bad day is…?
Waiting at the airport for a delayed flight.

What’s on your night table?
Framed photographs of my daughter and husband, roses from my garden, a small notepad; a silver cup with pens, pencils and a scale; too many books, my kindle, a few current magazines and an ancient clock radio which I don’t know why I bother to have because I only use the snooze button.

Which fictional figure do you identify with, and why?
It’s a schizophrenic mix of Tinkerbell sprinkling fairy dust and Glinda the Good Witch waving her magic wand with a heavy dose of Scarlet O’Hara – a strong, determined, resilient woman who can think outside of the box, generally gets her way, is perennially optimistic and can compartmentalize: “I’ll think about that tomorrow!”

What’s your favourite place for lunch?
I don’t really do lunch… Lunch for me is a sideline activity while juggling everything else.

What’s your computer screen saver?
At my office it’s a dreamy, tropical beach and on my home computer I have revolving photos of family and travels.

If you could invent something, what would it be, and why?
I would invent bisecting teleportation. Imagine being in two places at the same time and never having to take another plane again!

Music you love…?
I’m a complete chameleon with music and listen to what strikes my mood: jazz to pop, swing to samba, Joni Mitchel to Johnny Mathis, classical to country, Sinatra to Gaga, rock to reggae. James Taylor always sends me.

Music you hate…?
I find Sitar music annoying and grates on my nerves.

What three things are vital to your day?
Laughter, love and chocolate.

What’s the most expensive thing you’ve ever bought?
Cars and houses aside, I fell in love with a beautiful 18th century Italian walnut commode I could ill afford at the time but 20 years later I still have it and love it. The lesson is to not limit yourself in life and don’t be afraid to reach beyond.

What flavour of ice cream are you, and why?
Pralines and Cream. A classic – simple yet elegant.  Not too rich, has southern roots, a crowd pleas er, sweet not sugary, a little nutty, filled with a few surprises, satisfying, and is even better when paired with chocolate.

There’s a fire in your house, what item do you save?
Pets accounted for, it would be the family photo albums.

What’s the hardest criticism you’ve ever received?
That I came across as condescending. I was completely taken aback but it forever made me to always be aware of my tone of voice and what intentions I want to convey when speaking.

What piece of advise would you give your 20-year-old self?
One. Slow down and don’t be so hard on yourself.
Two. Paint a picture of who and where you want to be when you’re 40…. And 60… Live in the present and keep the paintbrushes by your side because the canvas will change.
Three. Let that boyfriend go!

What’s your proudest moment?
I’m lucky that I have many proud moments in my professional life being published and awarded, but in my personal life, my proudest moments are all about my daughter.