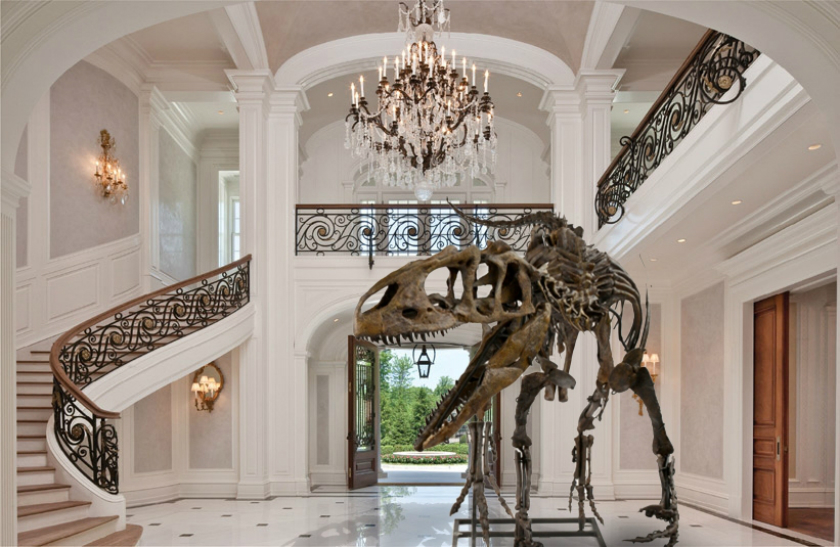 “A Rolex or a Maserati is a status symbol. That’s what they’re made for. But not an allosaurus,” said Brian Switek of the Guardian.

The heavily tattooed, prehistoric expert bemoaned the sale of dinosaur fossils, too often they’re falling into the hands of the highest bidder cast light on art’s dark secret: that demand for private ownership of dinosaur skeletons is irrevocably trendy. Switek claims private buyers don’t – or very rarely – use the dinosaurs for the advancement of palaeontological intelligence. Instead, they reckon them to the very art collections that inhabit the interior designs of their luxurious homes and condos.

Juxtaposing contemporary architecture and design with prehistoric décor is highly fashionable. And the private ownership of dinosaur remains is considered the ultimate symbol of status. In the grand scheme of things, if you don’t own one, you could be facing social extinction.

Transforming perished things into décor is far from being a neoteric vogue. The practice dates back to the Victorian era when shrunken heads, brought to England from Amazonian tribes in Peru and Ecuador, were the ultimate status symbols. Thankfully, times have changed however the appetite for lifeless art continues in strong vein.

An ancient Allosaurus, listed for sale in West Sussex, has thrown the subject of dinosaur décor and private ownership into sharp focus. The near-intact skeleton of the dinosaur is expected to fetch up to £500,000 when it comes up for auction at Summers Place on 25 November.  It’s estimated to be between 155 and 148-million-years-old and was dug up in Wyoming’s Dana quarry, seven years ago.

Considered a prized jewel for private collectors, Rupert van der Werff, director at Summers Place, said: “The Allosaurus, together with the T-Rex, has become the quintessentially large, carnivorous dinosaur in western popular culture.

Hitherto, the exploits of private dinosaur collectors had gone relatively undocumented and, normally, only the palaeontology community was incensed when anything bigger than an ammonite was sold. But the newfangled practice opens up a question: is owning a dinosaur skeleton really so important?

Hollywood actors Nicolas Cage and Leonardo DiCaprio clearly seem to think so. In 2007, the pair were involved in a high-profile bidding war over the head of a Tyrannosaurus bataar, which Cage eventually won for $276,000 (£180,000). And Hollywood’s fierce bidding war exemplifies how ownership of dinosaurs is high up on the art collector’s wish-list.