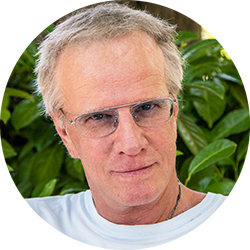 Through the fog of glib allusion and second-hand thinking, the wistful glimmer of Christopher Lambert’s larger-than-life persona shines right through like a lighthouse that hails safe harbour. Rather than parading his life-long cinematographic exploits, from his international breakthrough as Tarzan, Lord of Greystoke, to his Cesar-winning performance in Luc Besson’s Subway all the way to his role in the Coen Brothers Hail Caesar. I wanted to hear Christopher Lambert’s voice authentic, warm and intimate, sharing what only a selected few know. As he spoke of his dreams, loves, relentless passion for life and the need to be in constant movement, I was engulfed by an overwhelming feeling of ‘knowing him’.

Editor: Tell me something about you that most people don’t know?
Christopher: I’m a writer. Just published my second book, which came out on June 25 – a thriller that is called The Judge – an action packed thriller about the injustice of justice. We are looking to either do a movie or a mini-series. I’m already toying with the idea for a sequel.

Editor: If a genie were to grant you one wish, what would it be?
Christopher: To have more time to do more things.

Editor: What was your last thought before going to bed last night?
Christopher: Always my daughter’s happiness, that she may always have the very best in life.

Editor: A good day is…?
Christopher: A great day!

Editor: A bad day is…?
Christopher: No matter what, a good day!

Editor: What’s on your night table?
Christopher: The Little Prince.

Editor: Which fictional figure do you identify with, and why?
Christopher: TinTin. He gave me the strength to survive as a Kid. I was captured and inspired by his adventures, imagination and relentless optimism. Tin Tin helped me become the person I am today. And as I have read him throughout the years, I have gained more depth and learned more from his simple philosophy. The same goes for Little Prince whose philosophical lines are clear and made simple as it should be.

Editor: Most used emoji?
Christopher: Heart. I can use the smiley face and others, but my signature emoji is definitely the heart. I use it all the time.

Editor: If you could invent something, what would it be, and why?
Christopher: I would like to invent a time machine. I would love to travel back and forth in time and explore different periods, and find out if what we learn in history is in fact true. Like Connor MacLeod travelling through time and living different lives in each period. Even if I very much live in the present moment, I like the idea of being a time traveller.

Editor: What’s the most expensive thing you’ve ever bought?
Christopher: Hotel Pigonnet. When I first set eyes on the hotel with its sumptuous gardens, I had a ‘coup de coeur’. I said to myself, if I don’t go to heaven, I would have at least seen a part of it and this was pivotal in deciding to purchase Le Pigonnet.

Editor: What’s your greatest fear?
Christopher: To not have enough time to achieve everything I want to do. Time flies and there are still so many things I want to do.

Editor: What’s your guilty pleasure?
Christopher: I have absolutely no guilt in pleasure.

Editor: What flavour of ice cream are you, and why?
Christopher: Vanilla.

Editor: There’s a fire in your house, what item do you save?
Christopher: My passport.

Editor: What’s the hardest criticism you’ve ever received?
Christopher: I don’t give a damn about criticism. Except if they are constructive and they teach me something.

Editor: What piece of advice would you give your 20-year-old self?
Christopher: To always give it a try even if you fail. To never give up, to keep going and stay in movement.

Editor: What’s your proudest moment?
Christopher: My daughter’s birth. I remember when my ex-wife Diane Lane was pregnant, I wished every day for a girl and my wishes were granted when my daughter was born.

Editor: Your biggest accomplishment?
Christopher: I get up in the morning feeling as if you haven’t accomplished anything so I keep on going.

Editor: Best childhood memory?
Christopher: My brother is my best childhood memory because he inspired me. I realized much later that his way of being and living his life, being a gardener, a painter an artist, a sensitive soul who had a pure vision of life. I finally understood he was right. He gave me the most important thing. He taught me that life should be about happiness; that you should not take yourself seriously; to stay young at heart and see life through the eyes of a child – with innocence and curiosity. He was a pure soul. For me he was an angel on Earth.

Editor: What was the biggest risk that paid off?
Christopher: To become an actor. When 12 years old I had the absolute conviction that I wanted to be an actor but I really didn’t do anything about it until I was 19. I saw acting as the best way to escape into different realities, becoming different personas and experiencing freedom and depth.

Editor: You were once quoted stating your motto was: “always give it a try” “Always believe”. So is it safe to say, you believe in going to the very end of each journey, living each experience to its fullest and giving it your very best?
Christopher: Yes, this brings us back to your Q&A. I truly believe that you should always give things a try, and never give up, keep on going. If you fail the first time, try again using what you have learned from previous attempts, reinventing, reinterpreting and bringing something new each time. I feel we should be serious in how we invest ourselves in whatever we are doing but we should not take ourselves too seriously.

Editor: You have been referred to as an ‘in-betweener’ never having fully integrated Hollywood nor the French cinematic establishment. What is your take on this? Would you say you belong everywhere and nowhere? That you are a whole, you are part of yourself?
Christopher: There are so many things in life, so many layers to explore and different people and cultures to discover. I feel that one should adapt to each culture and not the other way around. We have so much to learn from other cultures, why should we get stuck in one? Born in the States and schooled in Switzerland where I was mixed up with over 28 different nationalities opened up my mind to the richness that comes with diversity. I learned this early on in my life. I consider myself fortunate to be able to navigate in and out of different cultures and feeling ‘at home’ everywhere I go.

Editor: You are known for bringing great sensitivity to each one of your roles. Do you consider yourself a romantic soul?
Christopher: I’m down to earth but also a dreamer. I am 100% romantic. And a hugger! I use my gut feeling, my instincts to discern people, specially in show business where you can find all types of individuals each with their very own agendas. I find it is easier to get a true sense of who someone is by hugging them, holding them in my arms and somehow feeling their souls. To look into their eyes and see what lies behind the façade. Eyes are the window to the soul. This is the way I have found the few friends I still have today. I just knew we would be friends when I first saw them, hugged and sensed them. With the women I have loved in my life, I knew the same way. I knew that they were meant to be. To embrace them and feel their souls.
For example, my greatest acting teachers were apes when I was training for Tarzan. They taught me to tap into my intuition, to trust it and feel it fully without filters and to be true to myself.

Editor: Favourite film of all times?
Christopher: Once Upon a Time in the West by Sergio Leone. I love animated movies like Disney’s Cinderella, Lion King and The Sword in the Stone where Merlin teaches the future King Arthur the gift of transformation which brings me back to my experience learning from the apes when I was training for my role in Greystoke: The Legend of Tarzan, Lord of the Apes.