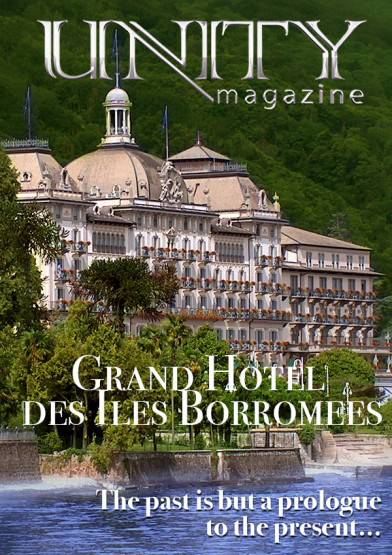 Lucy Self, Editor-at-Large explores the fascinating history of the stunning Grand Hotel des Iles Borromées on the stunning Lake Maggiore in Italy.

I reread these words as I follow in my hero’s footsteps to the wonderful Italian Lakes and namely to his favourite hotel and retreat, Grand Hotel des Iles Borromées on the Lake Maggiore. An opulent, stately hotel that glimmers on the former watery play-park of the rich and mighty, is steeped in history, both glorious and faded, yet still remains seductive and inspiring.

The construction of the Grand Hotel des Iles Borromées started in winter 1861, the same year of the proclamation of the reign of Italy. For the opening night a very selective public was invited: a few big hotel owners, various celebrities and a large group of nobility saw women swooping around in evening gowns. The Borromées hotel was instantly established as the “Grand Hotel” of the Lake Maggiore and the owners, the formidable Omarini brothers, quickly secured the most prestigious clientele, which included Hemingway.

The ambience remains the same with all the magnificence of the époque. Salons decorated with elegant mirrors lit with marvellous chandeliers. Decadence and wealth are imbued in the heritage…On a gloomy rainy day in 1870, a noble Russian woman engraved with a diamond on the glass of one of the windows of the hotel the following quote, ‘Alexandra, Grande Duchesse de Toutes Les Russies, née Duchesse de Saxe, 14-26 June 1870’. This reflects the romantic atmosphere that breathed in the rooms of the hotel.

With the arrival of the Orient Express, Stresa’s train station became a mandatory stop on the London-Paris-Milan-Venice-Istanbul line; bringing an elite tourism to the Grand Hotel des Iles Borromées. The number of guests started to multiply and the seasons of residence lengthened thus further.

By 1912 verandas were to be enlarged and eventually the hotel was enlarged with the super elevation of 3 floors.  This hotel was becoming a palace for the rich and famous!

In September 1918, the American writer Ernest Hemingway arrived in Stresa for the first time at the age of 19, recovering from a war wound.

Reminiscing about the beauty of the place, Hemingway, set part of his acclaimed novel “Farewell to arms” in the hotel. The name of the Grand Hotel des Iles Borromées has since became known worldwide.

With the start of the second world war, the hotels activity continued without interruptions, however it experienced severe set backs. Formerly occupied by the German troops and then the Americans, the building became a recovery site for the military.

With two wars and the difficult period for Italian tourism, the survival and renaissance of this wonderful hotel should be celebrated. The hotel has been recognized as a prestigious building by the Association of historical hotels and restaurants in Italy, and its story is continuing year after year. Public spaces have been restored, rooms, bathrooms and numerous meeting rooms have also been refurbished, thanks to the expertise of the architect Statilio Ubiali, who knew how to integrate the original décor and the new developments, in order to ensure a comfortable stay for modern travellers.

The amazing views of the Borromean golf with its charming islands is a stimulus for poetry, romance and serenity… as I open my journal and start to describe the beauty of the setting sun upon its watery bed I realise I may not have quite the same flow as Hemingway, but at least I can boast the same inspiration!